Barely a month after the first Yarona bus was handed over to the City’s Executive Mayor, today the leadership collective of the Rustenburg Local Municipality and taxi industry partners witnessed the handing of two completed kerb side stations in the Rustenburg CBD. This critical milestone is part of the on-going delivery project plan of the first of its kind integrated public transport system in the North West Province. The City hopes to be receiving six more completed RRT stations in the coming months, with the intention of the system becoming operational in the first half of 2021.

To date construction work has commenced on the system’s central station located on corner of Oliver Tambo and President Mbeki Drive, in the City center. Furthermore, plans are afoot to procure more buses to be used in implementing the system and the first batch of ten buses should have been delivered before year end. The implementation of the RRT was marred by numerous challenges, including community unrests, which the Municipality had to resolve in the interest of the continuation of the project and subsequent operationalization of the system.

In receiving the two completed RRT stations today, Rustenburg Executive Mayor, Councillor Mpho Khunou said, the process that led to this monumental achievement was never easy “we have to start by thanking our communities as well as the business sector for their patience and inconvenience that the construction phase of the project caused. There had been too many naysayers who actually did not believe that Rustenburg will realize an integrated public transport system, the first of its kind in our province. Having spent over 3 billion rands already on the project, there was no way we were going to give up. Rustenburg’s development and transformation depends on its people working hand-in-hand with the Municipality. We would alsolike to thank all the SMME’s that have participated and who today have benefitted from critical skills transfers. It has been a long 8 years, but the difficult times that we faced, were worth it as they prepared us for this day.

We will be also signing a memorandum of understanding with bus manufacture – Bus Mark, the BOC (bus operating company) which will further confirm that the realization of the project is on course and will be taking off the ground soon. The delivery of the new buses will assist us in training of drivers and thorough testing of the system ahead of the operation. We need to encourage our communities, to rally behind the City as we can no longer afford any further delays, if indeed we are to have the system operational and open to the public within the set time-lines” Mayor Khunou remarked.

Councillor Sheila Mabale-Huma, the City’s Speaker of Council said, indeed Rustenburg had come from far in realizing the RRT “I remember at the initial stage of conceptualization I was the Member of the Mayoral Committee responsible for Roads and Transport, today I am here on a different portfolio. I would like to encourage our residents to desist from the destruction of public assets as and when there are service delivery issues, if we allow for the RRT infrastructure to be destroyed, we would have destroyed the very legacy we have worked hard for” Speaker Mabale-Huma concluded.

Bus Mark Chief Executive Officer Mr. Patuxolo Nododa said he was proud that the Rustenburg Local Municipality and the BOC deemed it fit to work with Bus Mark, who have strong ties with German motor giant Mercedes Benz “we are grateful for the opportunity we have been granted by the Rustenburg Local Municipality to come on board as the transport solution provider. We are glad to announce that, though we have strategic international links, our buses contain over 95 percent of local content. That means we are able to sustain the over 1400 jobs that we have created by building the buses that will be operated on the RRT” he said.

In attendance at the hand-over were members of the Taxi Negotiating Forum (TNF) who have been engaging the Municipality on numerous issues, which included compensation of taxi operators who had been identified as being affected by the implementation of the RRT as well as the interface of how the Municipality and the taxi industry co-exist to ensure the successful implementation of the RRT. While the Executive Mayor was accompanied by the Members of the Mayoral Committee on

Once the system becomes operational, it will accommodate over 100-thousand daily commuters on the phase 1 and 2 of the road network. 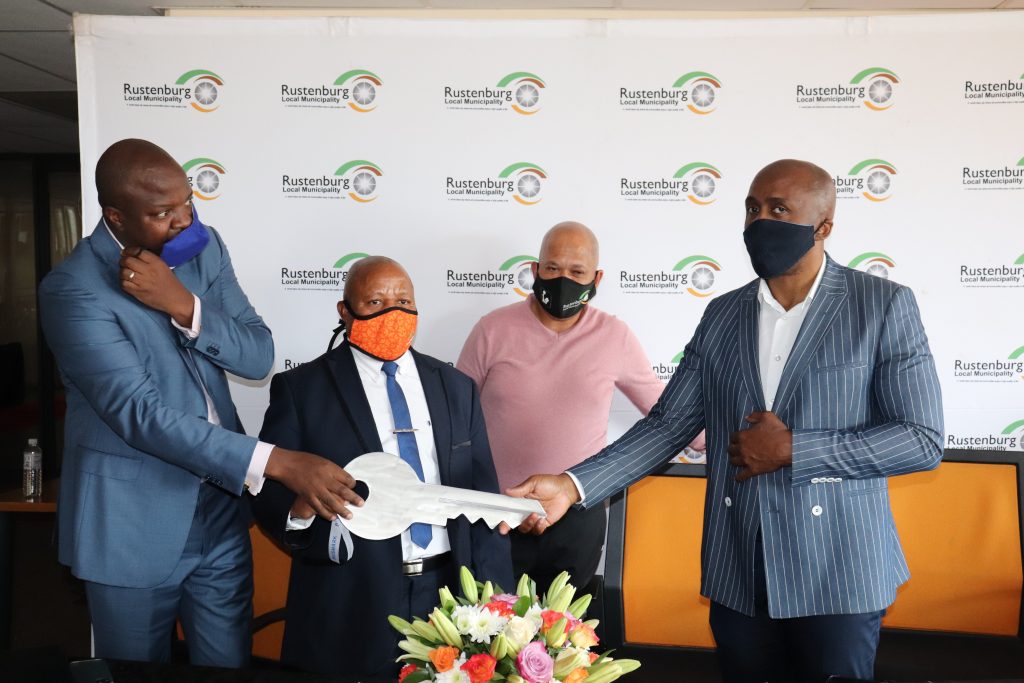