This serves to alert your good-selves of a disturbing trend of break-ins and theft happening in staff vehicles parked outside, at the usual Municipality parking opposite Old Town hall, Mpheni House and ABSA.

The modus operandi of these faceless forces of darkness, is seemingly, not to steal vehicles per se, but to steal whatever valuables found inside the vehicle. Please be vigilant: do not leave any valuables inside your car and arrange with the car guards to look well after your vehicles. 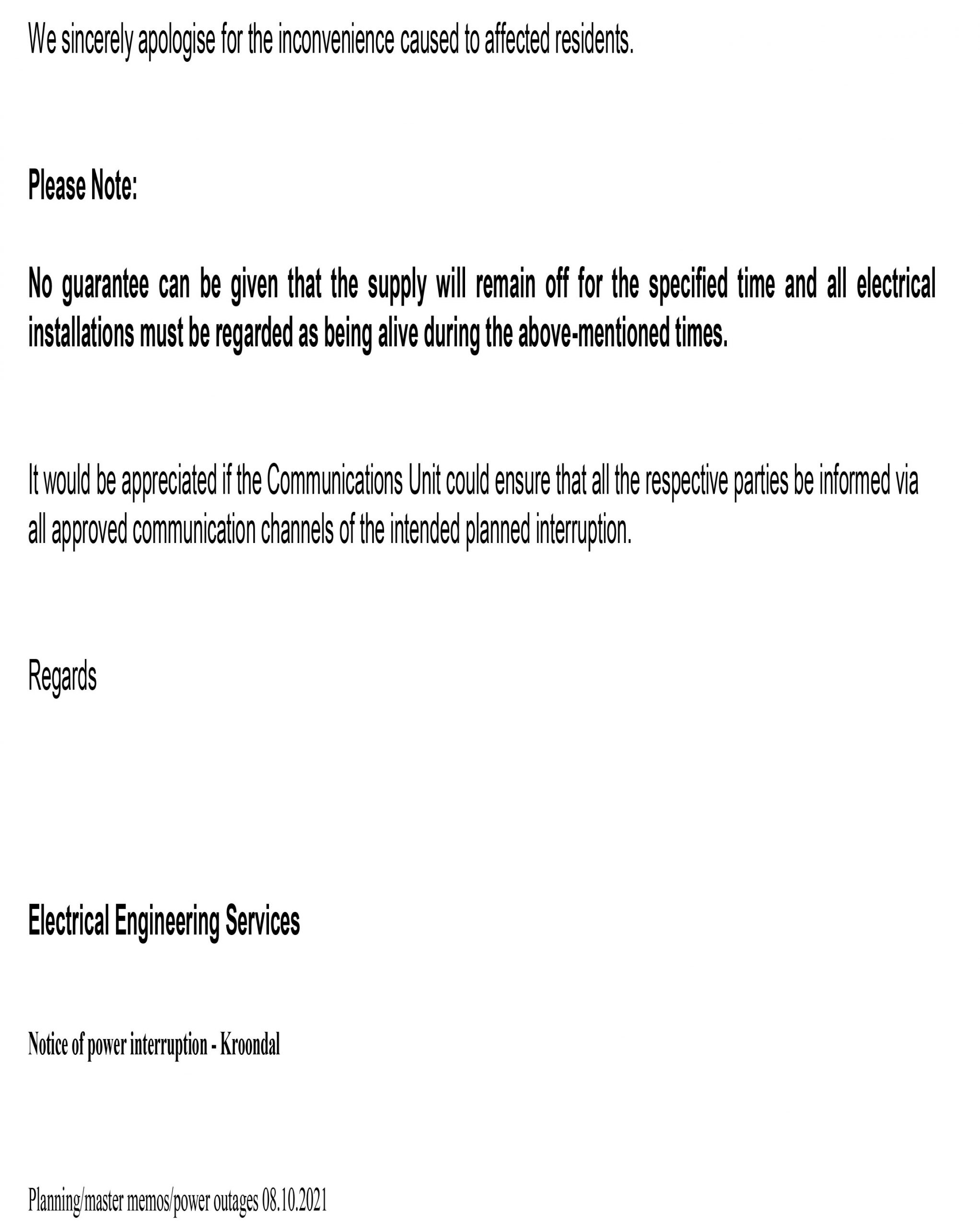 This serves to continue to update residents and businesses that theft and vandalism of our electricity infrastructure continue unabated. Transformer oil has just been stolen from one of our mini substations, leading to power outages, which has affected the following areas:

Our electrical engineers inform us that only two transformers can be repaired per day. It takes manufacturers eight days to manufacture transformer oil. To ensure continued provision of electricity, we have ordered extra transformer oil, which will be delivered tomorrow (28 August 2021). This means that at the pace at which these dubious acts of theft and vandalism continue like this, our communities will find themselves in complete power outages frequently and for long periods.

We therefore appeal once again to our communities to help us by reporting these criminal activities at their nearest police stations, or on the following Municipality’s numbers:

Let us love our city, join in the war against theft and vandalism of our infrastructure.

Eviction of Land Invaders at Rietvlei (along N4 national road)

The Rustenburg Local Municipality is aware of the land invasion that has occurred at portion 1 of the farm Rietvlei 271, Rustenburg, and is dealing with the situation as follows:

The Municipality has since applied to the High Court in Mahikeng and subsequently obtaining it, with the objective to evicting invaders. In order to enforce the court order obtained on the 14th May 2018, the Municipality requested assistance from the South African Police Service. This request was not successful as senior management of SAPS responded that they were unable to help, as they first had to seek legal opinion from their Legal Advisors.

The Municipality is of the opinion that the court eviction order is clear and unambiguous, that the South African Police Service, as the 6th respondent on the matter, of their role in helping the Municipality to enforce the order. Failure to act urgently will intensify unlawful invasion. On the 16th September 2021, the Municipality reported the intensifying land invasion at Rietvlei at Phokeng police station resulting in opening of the case ( Case No. CAS150/9/2021).

The issue has since been escalated to the North West provincial office of SAPS, which they acknowledged receipt of and agreed that the matter needs urgent attention.  The Municipality is currently awaiting response from the provincial SAPS office, moving forward.

We are however positive that provincial SAPS will respond positively, sooner, so that land invasion at Rietvlei is permanently dealt with decisively.

Theft and Vandalism of Electrical

We want to bring to the attention of our residents that the Municipality has been inundated with cases of theft and vandalism of electrical infrastructure over the past two months and beyond. These unfortunate evil deeds have been happening continuously, wherein critical equipments, such  as,  pole mounted transformers, miniature substations, street light poles, street light luminaires, cables and conductors, power transformers, pillar boxes, metering kiosks, earthing systems and earth bars on switchgear panels, have been stolen in broad daylight by armed unknown people.

This results in power outages in various areas of Rustenburg. As a consequence, to order equipment, repair and restore power, takes long time, leaving residents and businesses without electricity for long periods of time. This has caused big strain on the already limited resources, which are extremely costly to procure.  To mitigate this unfortunate challenge, we have devised the collaborative strategy to work with the South African Police Service (SAPS) and community based structures to report any acts of vandalism and theft.

Once again, we sincerely apologise to our communities for the inconvenience caused. We are positive that we shall together defeat this common enemy.

Temporary Closure of Municipal Offices Due to Covid-19 Pandemic

The municipality has recently experienced a surge in number of positive  Covid-19 cases. Just last week, the number of confirmed cases was standing at staggering and rocketing proportions.

In view of the current situation, and the advice by the Health Authorities the municipal office will be temporarily closed for a week (Monday 05th until Sunday the 11th) and all staff members, excluding those rendering essential services will be working remotely. The office will remain closed to allow workers who may have been in contact with the affected employees to self-isolate and for decontamination to take place, and generally for the safety of all employees and residents of the City. Further announcements will be made after the expiry of the period provided above.

Residents are encouraged to use the following alternative methods for payment of municipal services: EFT, all other online banking facilities, Easy pay facilities at various stores ( Pick n Pay, Ackermans, PEP, Usave, Shoprite and others).

To ensure that residents continue to receive service delivery, municipal manager will hold urgent management meeting to make necessary administrative arrangements for employees to work remotely in order to offer services when they are not in the office.

The municipality thank the residents for their understanding and cooperation and wish all who contacted Covid-19 virus a speedy recovery.

Since the beginning of this year, the Executive Mayor of Rustenburg, Councillor Mpho Khunou has been crisscrossing the Rustenburg with his unannounced visits to numerous areas where service delivery has had unrelenting bottlenecks, to the detriment of the community.

Previously, the Mayor accompanied by the Municipal Manager Mr. Victor Sello Makona, the Council’s Speaker and Single Whip – Councillors Shiela Mabale-Huma, Levy Mokwele and various members of the Mayoral Committee, have been to the City Centre, Tlhabane, Zinniaville, Karlien Park, Protea Park, Modikwe, Makolokwe and Bethanie among other areas.

Mayor Khunou had made a commitment to go to the grassroots to be able to gain better insight into the challenges faced by communities and to make follow-up visits to ensure that where challenges persisted, the responsible Directorates would take appropriate remedial actions.

The City’s first resident led an oversight visit to numerous projects which were funded in accelerating service delivery, in line with the Council adopted integrated development plan and said, the only way to ensure service delivery was a reality is to take stock of the situation on the ground “we cannot always rely on reports by senior managers and officials, as such to ensure that residents receive the service which they pay for, we need to physical verification and satisfy ourselves, lest we be found to have been irresponsible with the tax-payers money” Mayor Khunou said.

The visits, commenced at the Municipal Main Stores, which is a facility used by the RLM to procure all the critical infrastructure and components for the electrical, water and sanitation units, which are more often faced with increased number of reported complaints on a daily basis.

The visit to the stores, was to ascertain stock levels, for the three units, as previously shortage of supplied material stocks had resulted in prolonged inconveniences on the side of the residents, while the turnaround time for responding and resolving reported complaints was compromised, thus causing backlogs.

The entourage proceeded to Tlhabane which in recent months has been experiencing water supply challenges, following an earlier bulk water reticulation project which left under a thousand household disconnected from the older water supply network. Most of the households which were not able to access water have been put back onto the network as the appointed service providers continue to finish off the project.

In Tlhabane West, the City’s pump station located in the suburb was inspected, where has commenced on increasing the pumping capacity to ensure that residents in highlying areas have access to water, during period of unplanned and planned water supply interruptions. Currently when the reservoirs have low water levels, residents in the areas are unable to access water due to poor pressure in the system, which requires water cuts for increasing capacity and subsequent water flow to the area.