Launch of the #Itshireletse tuu program

Cllr Mpho Khunou, the Executive Mayor of Rustenburg, has this morning launched the #Itshireletse tuu program whose intend is to support learners and encourage them to protect themselves against the COVID-19 pandemic.

The municipality has since the advent of the pandemic mobilized and work together with business and other stakeholders to supply PPEs (Personal Protective Equipments) to needy schools and communities, to reduce the infection rate of COVID-19 and safe lives.

At its sitting this morning, the Virtual Special Council of the Rustenburg Local Municipality had deliberated on the following items:
1. Tabling of the Time Schedule for the review of the Integrated Development Plan (IDP), Budget and Performance Management System (PMS) for 2021/2022 financial year.
2. Determination of the date of Valuation of the New General Valuation Roll.
3. Proposed rules of Virtual Meetings and Sittings.
4. Progress Report on the Review of the Rules of Order By-Law.
5. Draft Ward Committee Policy Review 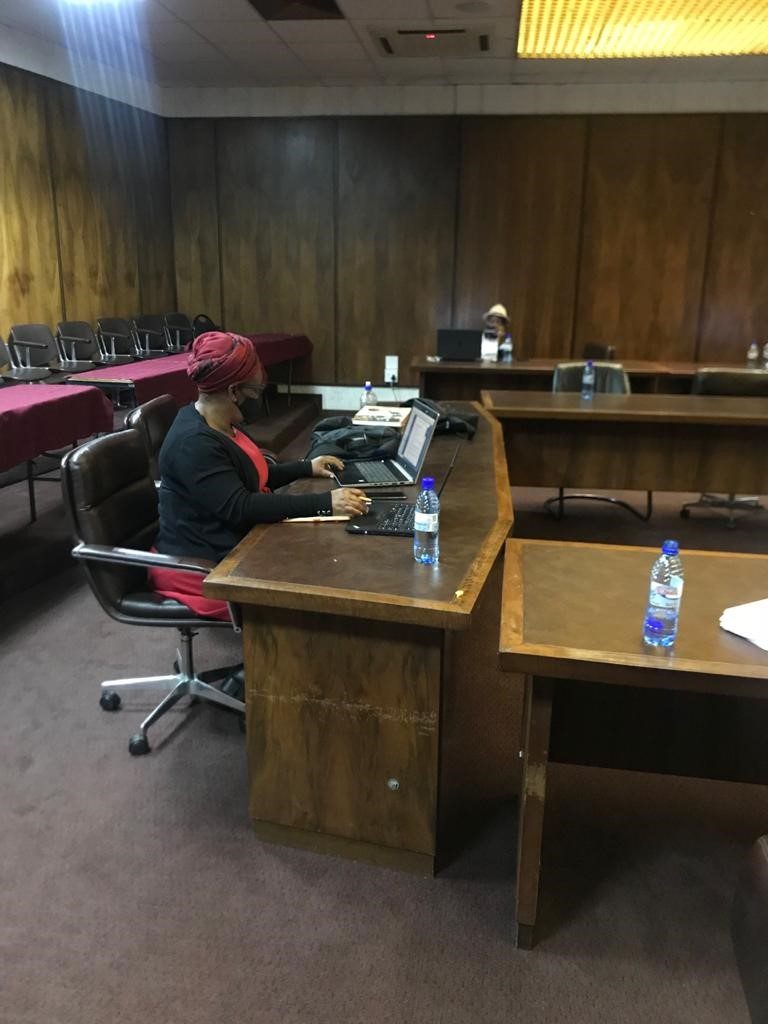 Delegation from the Rustenburg Local Municipality comprised of MMCs, Speaker of Council, Ward Councillor, Municipal Manager, and municipal officials led by the Executive Mayor,had this morning convened at the dam near Mfidikwe village where the two children from the nearby community drowned on 14th July 2020.

The municipality jointly with Anglo American Platinum Mine that owns part of the land at which the dam is located, is currently investigating ways to deal with the safety of the communities around the dam including the possibility of demolishing the dam. 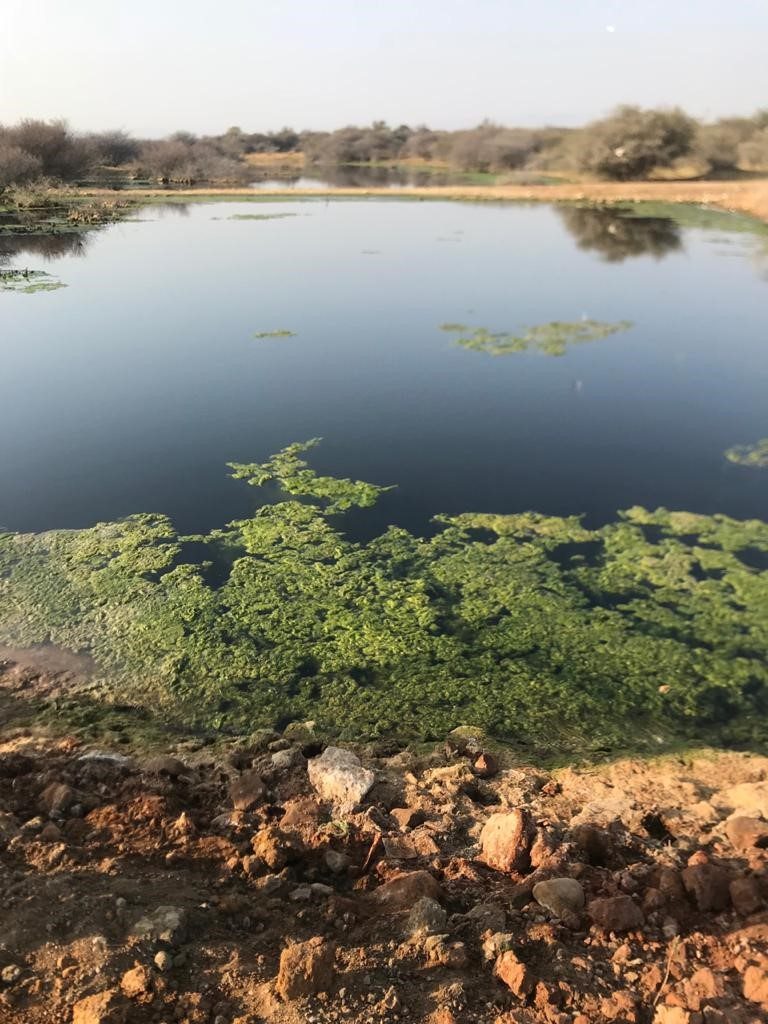 The weekly virtual meeting, which is hosted by the City’s Executive Mayor with participation from sector departments, mining houses, and law enforcement agencies, lauded the substantial progress which has been done, to reduce the rapid spread of the novel Corona Virus. The Bojanala district, since the nationwide lockdown, experienced an exponential rise in new recorded Covid-19 cases, to the extent that the region and Rustenburg have cemented their place as the Province’s hot-spot as a district and Local Municipality.

To date 12341 cases in Bojanala, with the recovery rate up to 63% and actual 7827 recoveries. Rustenburg has recorded 9092 cases with 6219 recoveries as at 13th August 2020. Despite the progress which has been registered in both the District and City, Rustenburg remains the Province’s hot-spot. The Department of Health in its presentation, said despite that the region and City had recorded a high recovery rate, much work still lay ahead.

One of the departments, which had been adversely affected by Covid-19 cases which included recording Covid-19 related deaths – the Education Department, said the break which was necessitated by the rising infection rate, has greatly assisted the department within the Rustenburg jurisdiction. To date, the department has not recorded a single Covid-19 case affecting an educator or a leaner. This has allowed the catch-up program much-needed break from interruptions, where disinfection of buildings as and when new cases are recorded. The resumption of teaching and learning has commenced with no challenges in respect of the return of Grade 7’s.

13 Early Childhood Development Centres (ECD’s) have since reopened to continue with the remainder of the educational calendar for the year. The resumption of operations at the various ECD’s follows a lengthy compliance process led by the Department of Social Development, to ensure that ECD’s are Covid-19 compliant to welcome back the children of varying ages to attend. 40 residents are currently at the shelter for the homeless, this center houses people who also are being assisted with social reintegration.

Anglo American has supported the department by donating Covid-19 Personal Protective Equipment (PPE) as well as other resourced for the upkeep and daily operations of centres which have been identified to assist victims of GBV. To date, in the last week, 12 new cases of GBV have been recorded within the Rustenburg Jurisdiction. The centres, mainly assist with overnight accommodation, while reintegration is implemented by social workers. The MEC for Social Development in the North West; Boitumelo Moiloa has donated 1.6 Million rands to Bessie Mpelege Ngwana to cater for 56 children, which is a specialized centre for children with disabilities.

The South African Social Security Agency – SASSA has reported improved service, following the challenges that the Rustenburg centre has had to confront, such as long queues caused by applicants of the Covid-19 relief fund. The Post Office, has over the last couple of weeks been processing payment and this has significantly reduced the number of people visiting the offices. In addition to this, satellite operating centres out of the City’s CBD have been administering new registration, following a joint communication and awareness campaign by SASSA and the Rustenburg Local Municipality to decongest the main office in the City centre. The Grant in Aid, Care Dependency grant are being implemented as well.

Anglo American Platinum has been hard work, with the clinical support programme. The main objective of the program is to roll-out training of health workers across 22 clinics in Rustenburg for Covid-19 screening, testing and PPE usage. This will further assist far-flung communities in receiving health-related services and becoming more Covid-19 conscious; this is a joint programme between AAP and the department Health as part of the IGR forum on Covid-19

The South African Police Services, South African National Defence Force, and members of the City’s Public Safety Directorate have been involved in ongoing crime prevention operations. These operations also focus on Covid-19 regulations, and the compliance affecting businesses and residents, in promoting general law and order. About 3020 vehicles have been searched in joint operations, 1251 liquor premises were inspected, 688 informal traders checked for general compliance including that governing the Covid-19 regulations. The operations have led to the seizing of about 5082 cigarettes which are currently not permitted for sale and distribution. The people of Marikana, have received support from Tharisa Mine, where numerous schools have been fitted with social distancing apparatus, to ensure that the premises observe all the Covid-19 protocols.

The Rustenburg Local Municipality has not been spared from the effects of Covid-19, to date about 94 officials had been infected by the virus and the recovery rate stands at 92%, with about 8% of active cases. In line with resolutions of the previous meetings, the Municipality’s Directorate for Public Safety has been conducting public awareness campaigns in the various wards, as this had been a serious concern raised by the Department of Health and the Executive Mayor, on the back of the increasing number of new cases.

On concluding the meeting Mayor Khunou, said the formation of the IGR Forum on Covid-19 could have been seen as a compliance requirement at the beginning of the lockdown, but great strides have been to cushion the impact of Covid-19 in the provincial hot-spot “I am elated of the progress we have registered. One needs to commend all of our social partners, who have always been relentless in their effort to ensure that Rustenburg, does not become a health hazard for the province” Mayor Khunou concluded.

Today, the Executive Mayor of Rustenburg – Councillor Mpho Khunou who was the main speaker at a ceremony organized by mining company – Anglo American Platinum to highlight incidents of Gender Based-Violence (GBV) as part of women’s month, said the time for talking was long over. The comments of the Mayor, come after an incident where a 10-year-old girl, was reported to have been raped yesterday.

The Rustenburg Local Municipality was represented at the event, by among other high ranking political heads including Council Speaker – Councillor Sheila Mabale-Huma and Member of the Mayoral Committee (MMC) for Public Safety, Councillor Victoria Makhaula. Mayor Khunou said, for a long time, people take a stand against incidents of gender-based violence, however, little had been done in the past to deal with this societal problem.

Mayor Khunou further said, much as the country is battling Covid-19 South Africa had long had a pandemic in the form of GBV “the truth is our mothers, sisters and children have long been in the battle, what has been worryingly absent is us, men. We need to rally behind any campaign that seeks to reverse the negative effects of GBV, lest we become a society with no women in it. It cannot be that we wait for August or 16-days of activism against women and children abuse, to speak out as men” he emphasized.

The Chief Executive Officer (CEO) of Job Shimankana Tabane Mr. Abednego Mvula, said women continue to account for most cases of persons suffering from mental and psychological conditions emanating from incidents of gender-based violence as well as work-place bullying by their male counter parts. He said, it is regrettable that such incidents happen however, they will not relent to ensure that women are treated with the necessary respect “Executive Mayor I have said, that women must come out and we must offer them support, to ensure that our reaction and behavior does not discourage them to ensure that perpetrators are brought to book. He concluded.

The department of Social Development, said it was humbled by the gesture made by Anglo American Platinum towards the NGO’s (Phokeng Trauma Centre, Thuthuzela, House of Grace and Kitso ke Lesedi) by making donations of perishable and non-perishable goods inclusive of blankets and Covid-19 PPE that will ensure that, the work continues uninterrupted and that victims receive the help they need. The NGO’s which have been identified and have also begun to receive both financial and non-financial support from the department to fulfil their mandates.

Mrs. Tumelo Dilotsotlhe of Anglo American Platinum, said the event was part of the company’s community response plan to address issues of socioeconomic conditions, which fit in with the number of priority areas the company is focusing on through collaborations. 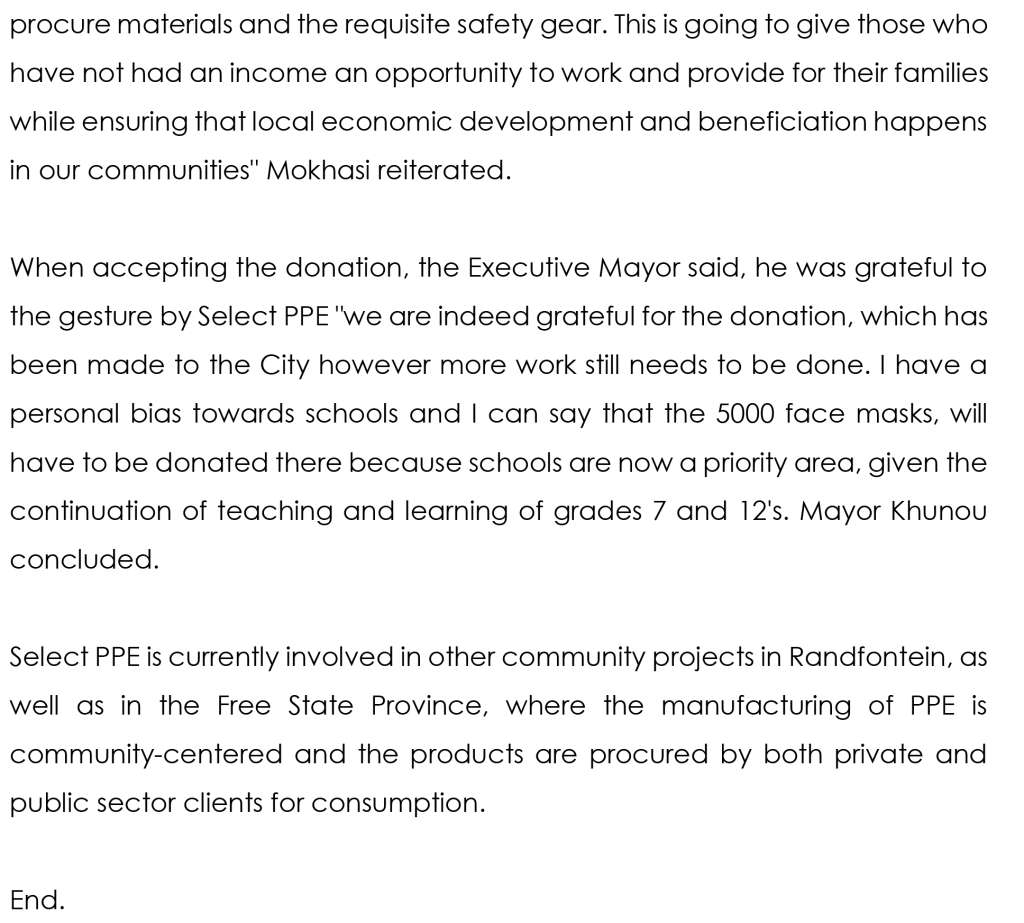 The Rustenburg Local Municipality has joined hands with mining giant, Anglo American Platinum to establish a new quarantine site in Rustenburg. The move comes on the back of the increasing Covid-19 infections in the City and makes Rustenburg the Province’s hotspot, a reality which has beset the mining City for over 3 months, with no end in sight. To date Rustenburg has recorded 8646 cases with 4686 recoveries as at 02nd August 2020.

Most recorded cases are from the City’s local hotspots which are Rustenburg CBD, Tlhabane, Marikana, Sunrise Park and Freedom Park. The City through the interventions of the Executive Mayor has been at the fore-front of providing solutions as the pandemic continues to ravage the region, with serious socio-economic repercussions. Today, two Members of the Mayoral Committee (MMC’s) or Public Safety – Councillor Victoria Makhaula delegated as Executive Mayor and MMC for Community Development Councillor Nombulelo Xatasi, met with a delegation from Anglo American Platinum.

The purpose of the meeting, was to conduct an inspection in loco at the Municipality’s Ben Marais Hall. The Municipality had committed to availing facilities to assist with the establishment of a quarantine site, this comes from the strategic social partnership between the Municipality, other government departments and the mining sector known as the IGR Forum on Covid-19.

The team from Anglo, had brought technical personnel to assess the current state of the facility which will house Covid-19 patients, a team of medical practitioners as well as technical support staff to manage the centre which will be administered by the Department of Health. The quarantine site, will mitigate the existing gap where some Covid-19 patient, fail to self-quarantine thus compromising the safety of others through movements.

MMC Makhaula, said the Municipality remains committed to playing the necessary part in this multi-stakeholder collaboration to help the people of Rustenburg, especially those who have impacted directly by the virus. Ben Marais, has previously been used by the Municipality to house homeless people, at between March and May 2020. The facility which was managed by the Department of Social Development housed over 80 homeless people, who have since been relocated to Rustenburg Recreation Centre. 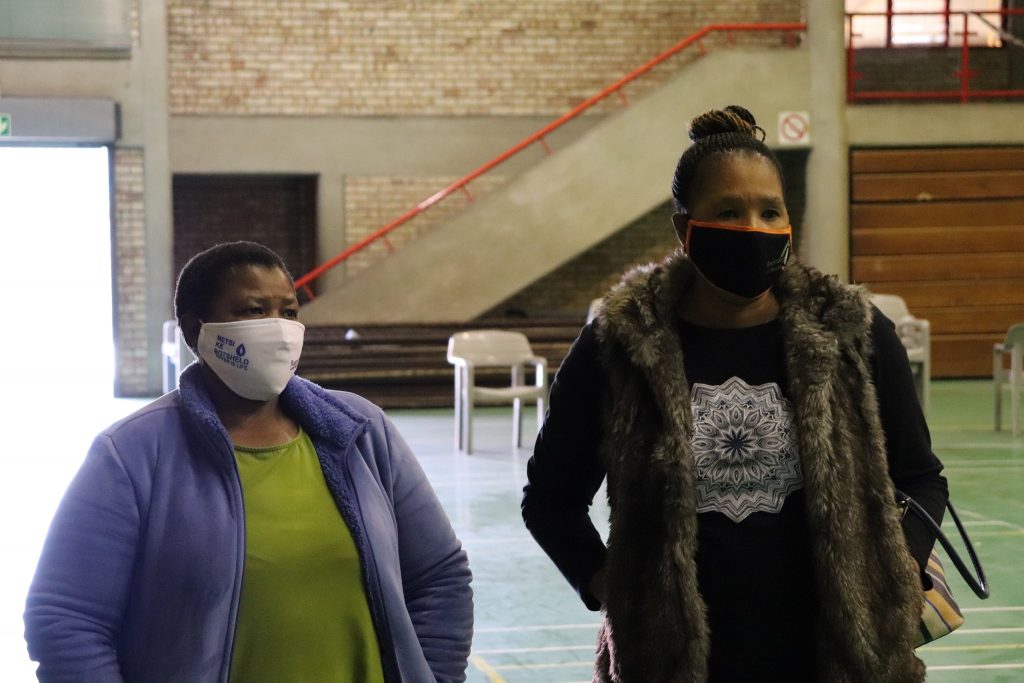